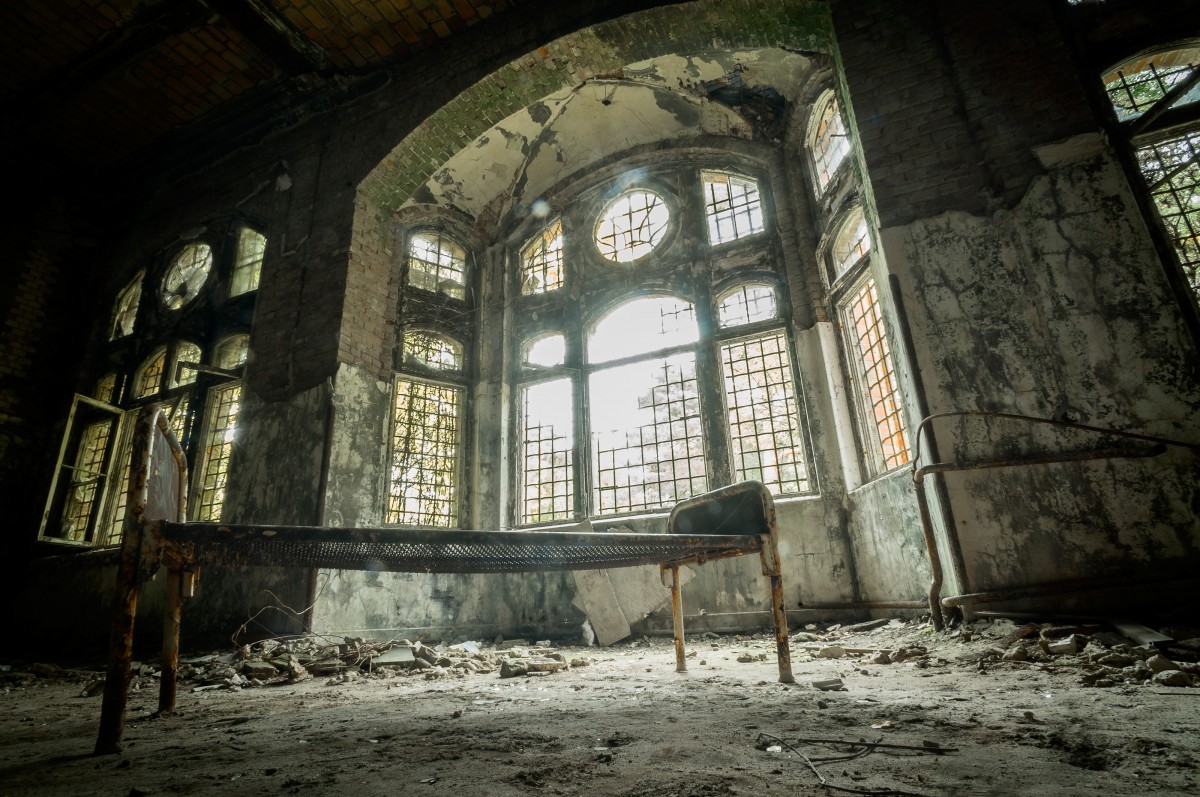 THE Tuesday night menu in the refectory was always the worst, food so vile and indigestible that it would be referred to as “The slop” or the “Gloop of doom” by the boys, their eyes ablaze with hunger.  But not so much hunger that they could face the bowls of execrable gruel.

This particular Tuesday was worse, being the last Tuesday before Christmas and matron’s brother in law Swem had been emptying the traps by the canal so that the bowls were a minestrone of amphibian and culvert dwelling mammal.  Terrence Beech turned green after a spoonful and had to excuse himself to go outside.  And was never seen again.

The upper forms spent the night combing the woods for him, their lanterns and school-issue cowls making them look like processionals of monks attending very late vespers among the conifers.

They found a badger carcass and signs of some villagers indulging in black magic but not a trace of Beech other than for a stand of trees of the same name.  It was as if he had photosynthesised.

Now Terrence Beech wasn’t one of the most popular pupils in the school but that didn’t mean that his fellow pupils, known as “sufferers” didn’t feel some shreds of anxiety at his disappearance.

Some even volunteered to make up a search party but were told in no uncertain terms that the police had it all under control as evidenced by the number of police dogs coming out of a fleet of vans, augmented by Scrote the gardener’s elderly bloodhound Boris, which knew that manhunt meant reward and was happy to get his nose to ground for a while in order to earn some chocolate buttons.

The school reacted strangely to the disappearance as you’d expect: it was a weird place, a mix of Dotheboys Hall and San Quentin.  A normal establishment would have cancelled the carol concert but Hardwick Boys’ Correctional decided to go on with the show.

They got the choir to make and wear masks based on the photograph of Beech which was being used by the police and the media so that they were all identikit and exceedingly spooky.  It was like some strange Yuletide production of a Greek tragedy, the chorus all back from the dead.

In the general science lesson the next afternoon Form Five were presented with the sight of the science master Mr Bowles standing in front of the class along with the chaplain.

‘Now then boys.  I’ve asked the chaplain along as our experiment today will try to ascertain the weight of the soul.  It’s been said that it weighs exactly twenty one grams…some of you may have seen the film of the same name and in light of what happened to young Beech I thought it might be appropriate to not only conduct the experiment but also to consider the not insignificant matter of the soul.  I’ll hand over to you now if I may Mr Chambers?’

The chaplain was an owl faced squinter of a man, whose short-sightedness was only one of his legion problems.  He has body odour that could wrestle one to the ground, the sort of crippling aroma that would surely be of interest to scientists at Porton Down.

‘The soul, that vital spark is one of the deepest Christian mysteries and I use those last two words most advisedly.  As Alexander Pope said in his probing poem:

‘That oxymoron, pain mixed with bliss is perhaps what happens when he shrug off the carapace of the mortal frame and ascend, yes ascend as many of us surely must to the great open reaches of heaven, to the angel fields, where the trumpets shall sound to welcome the righteous who shall indeed languish into life, the new life, the life reborn as the soul shines for all eternity.

‘Personally I laugh at the idea of the soul having a specific weight but I hope my little, well flight of rhetoric gives you some context for the science inquiry you’re about to conduct.  And don’t forget you’ll all be welcome in chapel on Christmas day.  Seven o’clock sharp.  Bring your best voices.’

‘Thank you, chaplain,’ said Bowles with only a faint hint of sincerity.  One might have got the impression that he’d only invited him along to cover his back, lest their experiment have unexpected or even uncontrollable consequences.  As it happened only the two brightest members of the class managed to get any valid data, managing to prove that the weight of the laboratory rat’s soul was 1.8 grams.

They had weighed it before and after the gassing and there really was a difference, as if the chaplain’s vital spark had density as well as energy. They wondered if Beech had a soul and if so how they might have weighed him in sufficient detail.  Presuming he was dead of course, which many did as he’d been gone a few days now and the nights were perishing.

In the abomination known as double maths the following day the teacher, Mr Hastings was explaining some of the precepts of statistical analysis and chose to do so with a question that managed to chill the blood of some of the more nervous pupils.

‘If there are 399 pupils in the hall for dinner and one of them goes missing – possibly for ever, possibly until his bleached bones, picked clean by the crows,  are unearthed beneath a hedge – then what proportion of the student body is considered lost?’

In the maths class the silence was glacial, not only because the boys couldn’t work out the sum in question but also because they didn’t like the fact that Terrence Beech was being used as casually as a decimal point.  It didn’t seem to be in good taste, or even necessary.

They needn’t have worried because in the following Thursday’s double lesson Terrence made an appearance, sitting at his usual desk, surrounded by a silvery aura that glistened like a snail.  He was silent, in keeping with the majority of ghostly apparitions but there was something fixed about his eyes, glazed like the icing on a doughnut, staring at Hastings as if he knew something about him, something bad.  Which was indeed the case because Hastings was involved in the young boy’s disappearance and that in a way that most people would scarcely believe.

Hastings had recently started an affair with a young girl in the village which had led to tensions and an incident involving a crossbow, not that those were directly involved with the Beech disappearance.  But they made him nervy, especially as he was man with a secret to hide, in being matron’s brother and as a consequence drawn into a family spiral with her brother in law, the hunter and trapper.  It was he who’d first mooted the idea of making and setting a man-trap to catch the peeping tom who’d been sighted three times in the past week.

Hastings thought it was an extreme reaction to a sad pervert, hidden in the privet bushes outside the gym and once seen slinking past the croquet lawn wearing what someone swore was an actual mackintosh.  But they made the trap, with jaws made from triangles of steel manufactured in the metalwork class and a spring mechanism that had been rescued from an old locomotive, a powerful arrangement that clamped shut the mouth of the trap in the blink of a bat’s eye.

It caught Beech rather than the peeping Tom, pretty much took off his legs below the knee and Hastings and Swem had to put him out of his misery even as a boy soprano sang ‘The Holly and the Ivy’ in the refectory, which helped muffle the sound of the claw hammer blow which put a bleak, precise hole in the boy’s forehead, dispatching him like a trout.

They disposed of the body in an adit leading into a disused coal mine and once they’d finished that foul deed Swem laid down a network of false scents and trails presuming there’d be dogs involved in looking for the boy.  He dropped pieces of blood pudding in patches of leaf litter, scattered drifts of bone marrow he would normally use on the tomatoes on paths and driveways.  And that might have been it, other than for the Dostoyevskian trouble for their consciences.

But Beech came back, haunting Hastings in every waking hour and walking into his sleep as well.   The teacher lost interest in eating, picking like a wren at a mice pie.

And lessons were adapted to reflect the mystery of the schoolboy plucked from the woods and his ghostly manifestation, the way he turned up to stare and stare.  In English they studied passages from a book called Possession: the Uses of Haunting in the Hudson Valley which showed how various American ghost stories changed and mutated over time.

Some days dead boy Beech would be there for all the science lessons of the day, his very existence flying in the face of the empirical and thwarting the validity of experiment.  Hastings grew thinner, more vexed with every passing hour, while Swem the hunter and trapper could not go outside without Terrence coming as silent witness to any of his actions.  It was beyond disconcerting, so Swem started to drink heavily, at all hours, hoping to banish the spectral fifteen year old via rivulets of booze.

The boy, meanwhile, now lived in a realm far beyond science – though a place, in truth, without a single angel or trace of heaven.  And he would haunt his murderers diligently, even on Christmas Day, sitting just beyond the plates of pudding and leftover ham, staring with Antarctic eyes, ones that would never shut, eternal witnesses to his killers’ dissolutions.

Jon Gower has over thirty books to his name, including Y Storiwr, which won the Wales Book of the Year award, An Island Called Smith, winner of the John Morgan Travel Writing prize and The Story of Wales which accompanied the landmark TV series. He is a former BBC arts and media correspondent and has recently been working on a book about the film director Karl Francis. (Photo: Emyr Jenkins)

For other original Christmas tales turn to our fiction page here